The classical period of witch-hunts in Early Modern Europe took place about 1450 to 1750, resulting in thousands of executions, peaking during the Thirty Years' War (1618–1648). Witchcraft persecution took place in all areas of Europe, including in what is now called Belgium. Men and women accused of sorcery were in most cases officially questioned, subjected to torture, examined and trialed. Many died horrible death, sentenced to the stake, exposed to strangling, burned or drowned alive. A lot of these detailed official trials and lengthy examination records are kept in various city archives and can still be consulted.

Jeanne De Deyster, born in 1593 in Nieuwpoort, Flanders, Belgium was the daughter of Jan De Deyster and Cathelijne Goossen. In 1603 her father who was said to be a wizard was trialed and burned at the stake. That way she already carried a bad reputation at the tender age of 10. In 1617 she married Jan Panne, a baker with whom she had eleven children. Ten of them died early. It is said that Jeanne Panne was very ugly and that she had birthmarks on her face and on her thigh. People thought that she had supernatural powers. She could pinpoint secret repositories of money and she successfully predicted which arch would break during popular archery games. She was arrested in May 1650, charged of killing two people.

During the trial, several witnesses stated that Jeanne Panne had caused them sexual problems. A man  declared that she had brushed against his pants and that he became impotent for six weeks. A woman came to testify that her husband was touched by Jeanne Panne at the start of their marriage causing him to lose his masculinity for ten weeks.

A "criminal expert" from Bruges investigated Jeanne Panne's body and discovered a spot that turned out to be insensitive to pin pricks. He decided that it was a devil's mark, the proof that Jeanne had made a covenant with the devil. On May 12 she was taken to the torture room and confessed that she had met the devil, that he had touched her breasts and that he had known her carnally. "He smelled musty and his limbs and his nature were as cold as ice." She repeated her confession the next day even without being tortured and she was sentenced to the stake. Two days later the verdict was executed.

In 2012, the Mayor of Nieuwpoort, on behalf of the municipality and the population, officially apologized for all witch-hunts that ever took place in the city, and 17 people who died on the witch’s pyre were posthumously acquitted of all blame. Ironically, a witch festival is organized in Nieuwpoort every three years in July. Jeanne Panne's life is re-enacted in various scenes, and a doll representing the witch is burned at the end of the evening. 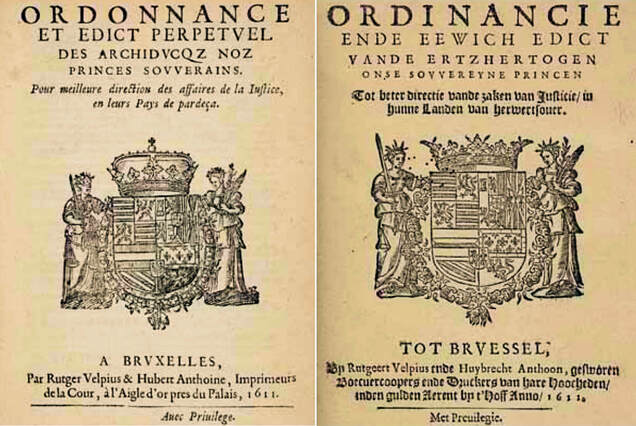 Priests had kept records of sacraments in bound register books, including baptisms, marriage bans, marriages, burials, and confirmations, all in Latin. That is why we find very old parish registers in the archives, including the oldest surviving marriage register from the territory of what is now Belgium: a 1482 marriage register from the Church of Saint-Gudula in Brussel. Keeping parish records was in fact later imposed by the Council of Trent, held between 1545 and 1563, Italy.

But in 1611, the "Decree and Perpetual Edict for the Better Direction of Matters of Justice" was proclaimed by the Archdukes Albert and Isabella governing legal process in the Southern (Spanish) Netherlands. It consisted of 47 clauses laying out the basic rules of criminal and civil procedure. It was printed in both Dutch and French. The edict had a fundamental impact on the codification of customary law. More important for genealogists, it also placed a legal obligation on parish churches to register births, marriages and deaths, and on local magistrates to ensure that the secular authorities obtained a copy of these registers each year. That way, the government had access to basic data previously only known to the Church. On the front page we see the blazon of the Archduke, flanked by the allegories of Justitia (left) and Pax (Peace). Notice that there are differences between the two language versions: the closed crown and a blindfolded Lady Justice in the French version, and the open crown and Lady Justice without blindfold in the Dutch version. The document was reprinted many times and was included in numerous
law books and law collections. 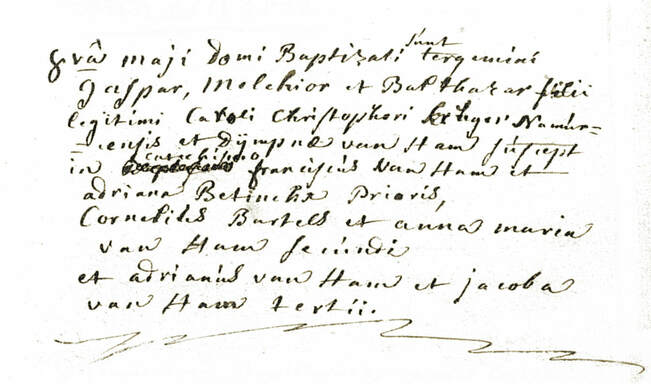 While browsing through the records of the old parish of John the Baptist in Roosendaal, now The Netherlands, we find a christening record for triplets called Gaspar, Melchior and Balthazar Krüger. The three boys were born on Friday 8 May 1767, sons of Carolus Christophorus Krüger en Digna Van Ham. Their given names refer to three kings from the east. Epiphany or Three Kings' Day is a Christian feast day that celebrates the revelation of God incarnate as Jesus Christ. The traditional date for the feast is January 6. It commemorates the three "wise men", magi, or kings from the east who saw an ascending star and searched for the newborn king of the Jews. They arrived in Bethlehem and found Jesus. In old Greek they were called Apellius, Amerius and Damascus, in Hebrew Galgalat, Malgalat and Sarathin, but they became widely known under their latinized Persian names Caspar, Melchior and Balthasar. Popular Epiphany customs include the blessing of houses including chalking the front door with the initials C+M+B: the letters stand for the initials of the kings (Caspar, Melchior, and Balthasar) but also the phrase Christus Mansionem Benedicat, which translates as "may Christ bless this house". In the Netherlands, Belgium, Luxembourg and Germany, children in groups of three proceed in costume, carrying a star on a stick, going from house to house while singing songs typical for the occasion, and receiving coins or sweets.
The difficult Birth of the Saxophone

Antoine-Joseph Sax was a musician born in 1814 in Dinant, Belgium. He invented the saxophone in the early 1840s. He also invented the contrabass clarinett, the saxotromba, saxhorn and saxtuba. While his given name was Antoine-Joseph, he was referred to as Adolphe from childhood. His parents were also instrument designers. Sax faced many near-death experiences. Over the course of his childhood, he fell from a height of three floors, hit his head on a stone and could barely stand afterwards. At the age of three he drank a bowl full of vitriolized water and later swallowed a pin, burnt himself seriously in a gunpowder explosion, fell onto a hot cast-iron frying pan, survived poisoning and suffocation in his own bedroom where varnished items were kept during the night, was hit on the head by a stone, and fell into a river barely surviving. Adolphe began to make his own instruments at an early age, entering two of his flutes and a clarinet into a competition at the age of 15. After leaving the Royal Conservatory of Brussels, Sax began to experiment with new instrument designs, while his parents continued to repair and construct conventional instruments to bring in money. He relocated permanently to Paris in 1842 and began working on a new set of instruments. The saxophone was Sax's signature accomplishment and created his reputation more than any other. This helped secure him a job teaching at the Paris Conservatory in 1857. He married in France and had two children. He suffered from lip cancer between 1853 and 1858 but made a full recovery. Rival instrument makers attacked the legitimacy of his patents and were in turn sued by Sax for patent infringement. The legal back-and-forth continued for over 20 years. He was driven into bankruptcy three times in 1852, 1873, and 1877. Adolphe Sax died in 1894 in complete poverty.

Of course in our days, Dinant has its own saxophone Interpretation Center called La Maison de Monsieur Sax: not a museum but a place where you can learn all about Sax and his musical instruments.

Regarding genealogical research: the Dinant parish and civil records range from 1500 to 1916, but the actual parish registers were destroyed due to a bombardment in 1914. Only the indexes survived. That is why we can show Sax' French death record but not his Belgian birth certificate. Other genealogical sources in Dinant are notary deeds, military papers, archives of the Bailiff, cadastre plans, etc. 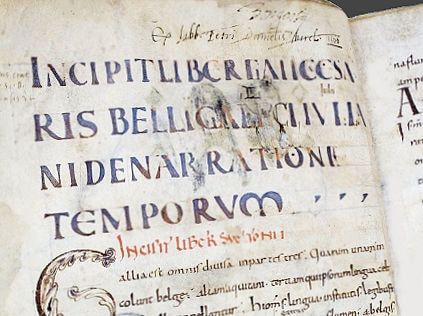 The Belgians are the Bravest

At the time of his conquests in 58-51 BC, Gaius Julius Caesar wrote a firsthand account of the battles and intrigues that took place in the nine years he spent fighting the Germanic and Celtic peoples in Gaul who opposed Roman conquest. The result a was book split in eight sections, called "Commentarii de Bello Gallico" (Commentaries on the Gallic War). The reason for writing this was that he needed the support of the Roman plebeians, particularly the Tribunes of the Plebs, on whom he chiefly relied for help in carrying out his agenda. His victories in Gaul had increased the alarm and hostility of his aristocratic enemies in Rome who were spreading rumors about Caesar's intentions once he returned from Gaul with his army. The Commentaries were an effort by Caesar to directly communicate with the plebeians by circumventing the usual channels of communication that passed through the Senate. Of course his vivid account of the battles is of great importance to historians. In the Commentaries Caesar mentioned several leaders of the Gallic tribes, including Ambiorix, Diviciacus and Vercingetorix. He also provided his audience with a picture of Germanic lifestyle and culture. The Germans were seen as primitive hunter-gatherers with a diet mostly consisting of meat and dairy products, and who worshipped earthly gods such as the sun and the moon. Caesar also wrote about the importance of Druids and the superstitions of the Gallic nations. Among them were the Belgae, a large Gallic-Germanic confederation of tribes living in northern Gaul, between the English Channel, the west bank of the Rhine, and northern bank of the river Seine. Caesar noted "horum omnium fortissimi sunt Belgae" (of them all, the Belgians are the bravest). A citation in our days cherished by the Belgians. But if we read the whole sentence their strength is less flattering: "Horum omnium fortissimi sunt Belgae, propterea quod a cultu atque humanitate provinciae longissime absunt, minimeque ad eos mercatores saepe commeant atque ea quae ad effeminandos animos pertinent important, proximique sunt Germanis, qui trans Rhenum incolunt, quibuscum continenter bellum gerunt": of them all, the Belgians are the bravest, because they are furthest from the civilization and refinement of our [Roman] Province, and merchants least frequently travel to them, and import those things which tend to effeminate the mind; and they are the nearest to the Germans, who dwell beyond the Rhine, with whom they are continually waging war". Caesar's books were reproduced and printed throughout the centuries.
Coming soon: